Get ready to unleash your greatness in this powerful seminar featuring award winning speaker Desi Williamson. Through captivating stories and useful examples, Desi illustrates the action oriented mindset required to overcome obstacles and achieve any goal you set. You’ll learn how to reignite your purpose, stay focused on the big picture, develop true “will power”, become a master of change, raise your performance level, challenge your fears, and much more. Desi Williamson believes that when you remove the mental mountains that stand between you and your goals, things start to happen quickly. So, if you believe “Where there’s a will, there’s a way!”, it’s your turn to step up and live the life you’ve always dreamed of. 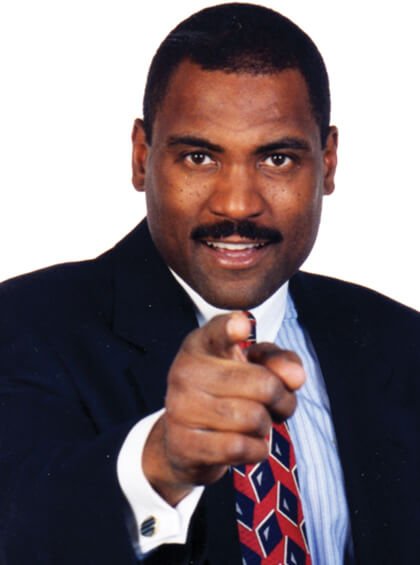 Desi Williamson beat the odds, despite growing up in a world surrounded by poverty, drugs, and violence. He overcame a myriad of obstacles to realize his dream of becoming a successful businessman, professional speaker, and best-selling author. In 2004, Desi Williamson was inducted into the CPAE Speakers Hall of Fame, and received the coveted CSP award, the highest earned designation by the National Speakers Association. Today, Desi Williamson travels the world, delivering high impact training programs based upon 25 years on the front line in sales, management, marketing, and leadership. His impressive list of clients includes Microsoft, Sherwin-Williams, Johnson & Johnson, Allstate, and the Minnesota Vikings.

So challenge limiting beliefs. Now, by the time the average child has reached the age of 18, they’ve had a half million negative impressions on what we call our disk. My disk, our disk, that’s the disk. I use this as a metaphor for the six inches between our ears called the brain. Now how many of you know negative people? How many of you will see them tomorrow? Here’s what I want you to tell them. You don’t want to hear their negative inputs because 80% of the people don’t care and the other 20% are glad it’s happening to you. Right?

You have to be willing to challenge fear. We’ve all got fears. I’ve got them and it comes from my programming. The older we are, the more experiences we’ve had for which to base our beliefs. I’ll give you an example.

How many of you like dogs? Raise your hand please. How many of you believe that a dog is man or woman’s best friend? You see, I don’t like dogs. I’m not a dog person. Mostly it’s out of fear, right. I mean, there are four classes of dogs that I really don’t like: Rottweiler’s, German Shepherds, Doberman Pinschers, and Pit Bulls. The lady says, “Yeah, but mine is a Chihuahua. Isn’t she cute?” I said, “No, she’s got teeth, she’s got potential. I don’t trust her neither.”

Now where did it come from? It came from an experience I had when I was a boy. My mother takes me over to a friend of hers house. Ding, dong, ring the doorbell. The storm door swings open, a Doberman Pinscher squatting there proudly, I freeze in my tracks. The lady says, “Oh, don’t be ridiculous. Get in here.” He won’t what? He won’t bite? I walked in there that dog almost tore me in half; bit me in the crotch. I’m proud to say as evidenced by 19-year-old daughter and my 16-year-old son that everything turned out alright. But I’ve got a belief system you can’t trust, especially Dobermans, because they’re sneaky.

Fast forward now. On my disk, all these years, is fear about dogs. Super Bowl Sunday, I’m over at a friend of mine’s house named Phil Webb. Philip used to be a fire fighter. He retired. He used to be a trainer of dogs in Viet Nam. He used to train fighter dogs. He’s got a Doberman Pinscher named Chaka. He’s taught her to answer the phone. The phone rings and the dog brings the phone. Every time it rings, and brings it to Philip.

So Super Bowl Sunday we’re watching the game, right. Pittsburgh Steelers and LA Rams, got the chip and dip, hanging out. You know, we’ve got the Super Bowl on;